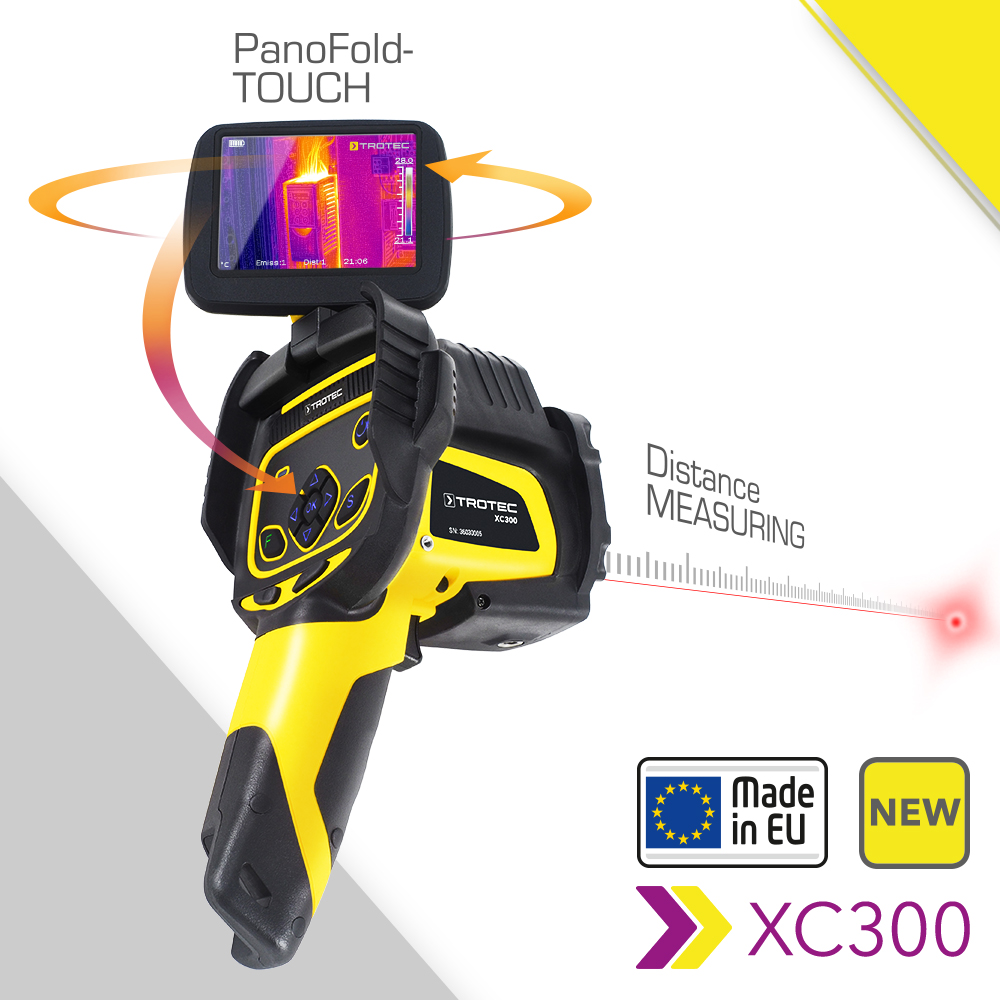 Our new professional flagship XC300 thermal imaging camera measures temperatures of up to +600 °C and makes differences of just 0.05 °C visible. This is made possible by a high-resolution 384 x 288 infrared image detector with its 110,592 autonomous, single temperature measuring points. It comes with live view settings, IR video and DuoVision Plus functions. You can read these on the PanoFold display, which can be pivoted in practically every direction and is unique for this type of camera. All of this is offered at Trotec’s usual, unbeatable price-performance ratio.

END_OF_DOCUMENT_TOKEN_TO_BE_REPLACED

There are no outbreaks of mould without moisture. However, whoever wants to track it down like a professional renovator requires such a professional measuring device – something that can determine the material and surface moisture. Or can make notorious thermal bridges identifiable through the measurement of the surface temperature. In the second part of our series “Where does moisture come from?”, we introduce the professional measuring device that precisely determines moisture as well as its causes…

END_OF_DOCUMENT_TOKEN_TO_BE_REPLACED

With energy-related renovation, thermal bridge analyses identifies large weak points in thermal insulation. Best example: Almost all thermographic pictures taken of an existing building with roller shutters make it clear that there are thermal weak spots. Evidently, these casings were not, or barely, insulated at all up until the 1970s – and since then have been tearing big holes in the energy efficiency rating of every house. Renovation companies should be able to prove whether action needs to be taken here…

END_OF_DOCUMENT_TOKEN_TO_BE_REPLACED

Weatherproof clothing, binoculars and lots of patience are all essential when you are tracking wildlife. Whatever your reasons for being out in the woods or field, whether you’re hunting, game keeping or collecting data – now you can effectively upgrade your equipment, so that you don’t have to wait long for success. Always take your thermal imaging camera with you. You will be able to detect wildlife even when visibility is poor or in complete darkness. Trotec can prove it to you with the thermal imaging camera IC080LV. END_OF_DOCUMENT_TOKEN_TO_BE_REPLACED

It’s that time again: every two years the Mostra Convegno Expocomfort (MCE), the international exhibition for heating, ventilation and air conditioning technology, takes place in Milan. Around 2,000 exhibitors from 59 countries show their solutions at this highlight of the sector. Trotec is also presenting some of its innovations: from Qube, through the industrial VSC series videoscopes to humidifiers from the Value Protection Range – and that is by no means all! END_OF_DOCUMENT_TOKEN_TO_BE_REPLACED

Offshore oil leaks are a catastrophe which threatens people and nature. Therefore, oil spills must be located as soon as possible, so that the substance can be suctioned off before it causes huge damage. Since here there is little time, and above all, the oil slick must be prevented from reaching the coast, modern technology must be used. The infrared thermography offers help quickly and precisely! Thermal imaging cameras are in fact able to make oil slicks identifiable quickly – even if the weather conditions offer poor visibility and a high swell. The display of the temperature differences of the oil slicks makes it possible. An area is then located and their size is also determined. The thermal imaging camera IC080LV shows reliable oil deposits in the sea and so the specialist and emergency response have accurate information on hand. END_OF_DOCUMENT_TOKEN_TO_BE_REPLACED

Posted in TROTEC, Up To Date | Tagged with Thermal imaging camera, infrared camera | Leave a comment

A solar installation outage can prove costly for the operator. It’s not just that no power or reduced power is fed into the electricity grid for a period of time. The longer a malfunction interferes with a solar installation, the greater the effort and costs of repairs. That’s way it is recommended to give this technology a thorough check-up regularly. How does that work? Quite easily – with infrared technology! Within minutes, a thermal imaging camera shows what condition an installation is in along with its individual cells, connections, links and inverters. Anyone who wants to stop significant damage to a photovoltaic installation before it is too late can reach for an infrared camera from Trotec’s IC series. The inspection only lasts a brief amount of time and then you can be sure that the installation is running correctly or know at what points the first defects are already appearing. This applies for inspections before the guarantee expires, for documenting proper operation after equipment installation or for trouble-shooting. Trotec’s infrared technology is your reliable workmate. END_OF_DOCUMENT_TOKEN_TO_BE_REPLACED

The force that acts upon the turbines of a wind power plant is enormous. Therefore, the components which are manufactured from composite materials must be in flawless condition. Even the smallest of material defects can lead to substantial dangers – from the risk of cracks which mean generation downtimes or even rotor blade breakage. Both during production and then shortly before assembly, the rotor blades must be subjected to rigorous quality control checks. Even the smallest of cracks and concealed defects in the material of the components are made visible with the help of infrared technology. The thermal imaging cameras from Trotec provide the newest technology for detecting faults in composite materials. With the IC080LV thermal imaging camera, a precise and non-destructive inspection of the rotor blades is carried out quickly and easily. For the highest degree of safety during the commissioning of wind power plants!

END_OF_DOCUMENT_TOKEN_TO_BE_REPLACED

As an experienced mechanic in heating engineering you can surely feel with your hands how well heat spreads across heating systems. You notice even small temperature differences in a heating unit quickly. But now you can make your diagnosis even more quickly and accurately, with the help of a Trotec Thermal Imaging Camera!

In the blink of an eye you can have a clear picture of how well the whole heating system is working. Which in turn illustrates to your customers that repairs are necessary, and when you have finished, you’ll also have a picture of the heating system working efficiently. Satisfaction and certainty for both parties: thanks to a Trotec thermal imaging camera.

Heat distribution – see for yourself!

END_OF_DOCUMENT_TOKEN_TO_BE_REPLACED

Besides in the corners of rooms, mould seems most prone to growing on window reveals: But why here, in particular? Surely here the sunlight should provide sufficient warmth, at least during the daytime. A look through the thermal imaging camera will shed some light on the matter: in spite of the sunlight, thermal bridges can also form in this area, and with them comes mould.

The outer edge of the window reveal is one of these thermal bridges. Temperatures drop repeatedly in this critical area which leads to precipitation, especially during the winter months. Moisture levels of between 70% and 85% combined with organic materials which feed mould growth, such as wallpaper or wallpaper paste, is enough for mould to settle down here for good. END_OF_DOCUMENT_TOKEN_TO_BE_REPLACED