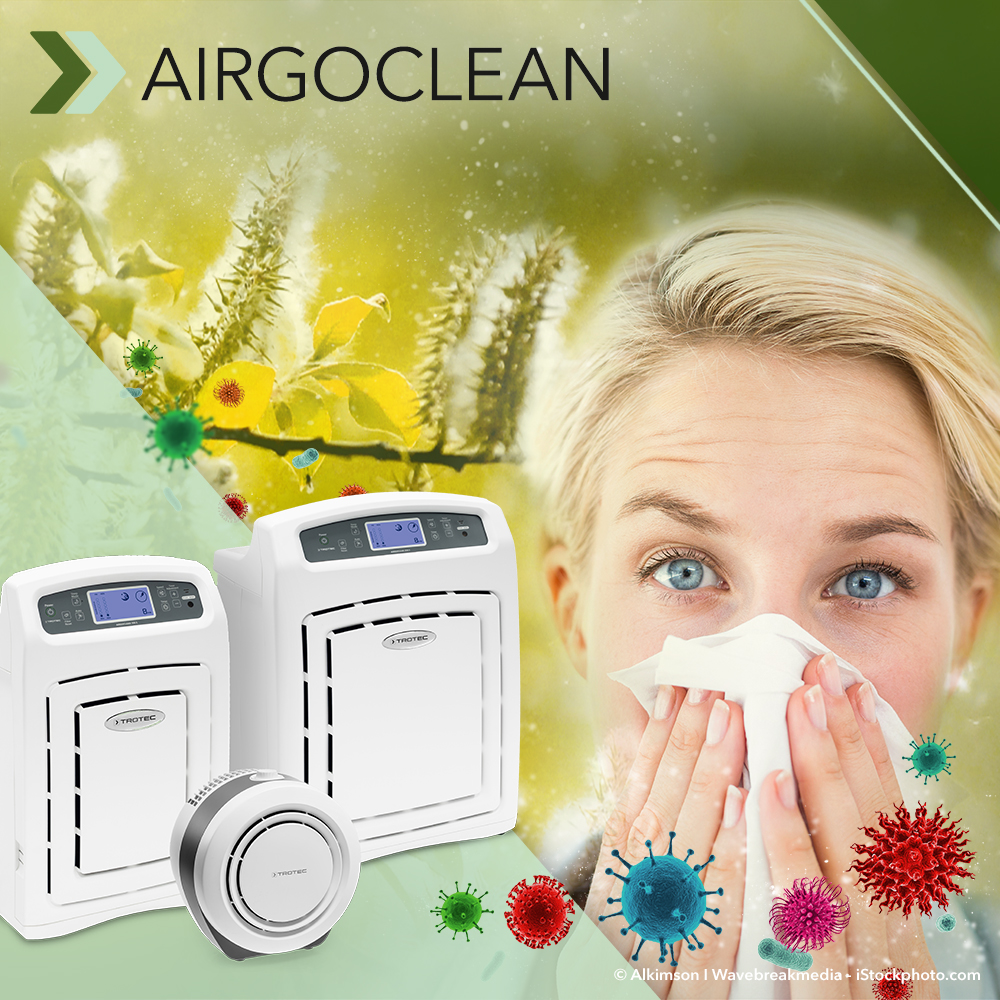 Meteorologists know it and allergy sufferers are feeling it already: pollen is back. This year owing to the mild winter it has come particularly early, since that has caused all the vegetation to awaken from its hibernation earlier. And that has meant that pollination has also begun earlier than actually expected – hazel and alder are especially active. Has your reaction to this been hay fever? Then you should know how you can keep out of the way of the early bloomers when you’re at home…

END_OF_DOCUMENT_TOKEN_TO_BE_REPLACED 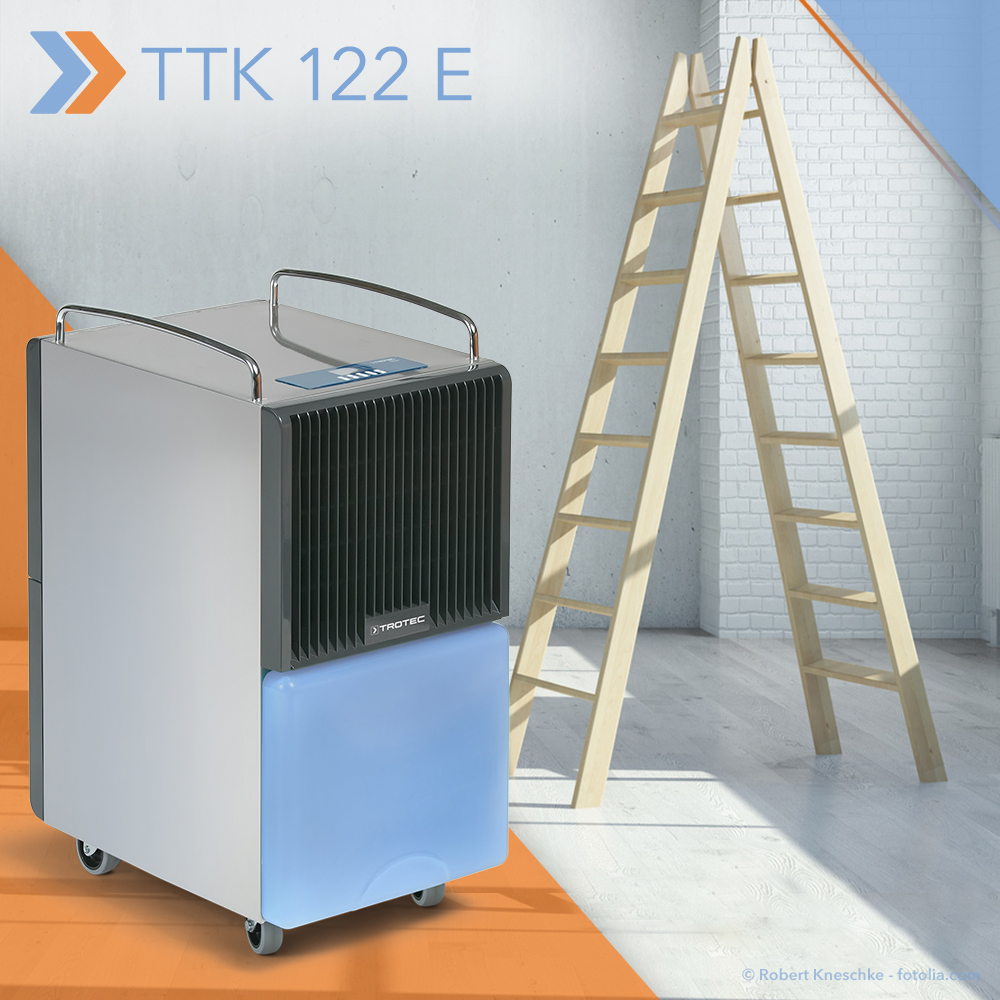 Its high dehumidification rate, sturdy housing made from stainless steel, high-quality hot air defrosting system – these are the outstanding practical advantages that make the handy TTK 122 E dehumidifier highly sought after among specialist drying equipment in the renovation sector. Add to this the automatic hygrostat-controlled system, the SuperDry function and the unbeatable Trotec price – and you know why the dehumidifier sold out. And why it’s finally available again …

END_OF_DOCUMENT_TOKEN_TO_BE_REPLACED

And it doesn’t just smell awful (who could ever forget that biting stench that hits you when you enter a room where mould has been festering unnoticed for some time in concealed corners or cavities or behind tiles, panelling or dry walls or ceilings?).

And it doesn’t just cause you to catch your breath when you are unwittingly confronted with the dank, earthy odour that causes your eyes to sting and your senses to reel.

Mould is dangerous. It can not only cause wood, for example furniture and even the structure of buildings to rot and decay, it can also cause paper and leather to stain and weaken and it can damage goods, books, fabrics and prized possessions beyond repair.

But worse still it can trigger allergic reactions, cause severe skin, respiratory and other health problems – and it can kill.

This is why some countries, particularly the UK, the US, Canada and Germany, have taken a new approach to tackling this widespread problem and have started to use so-called sniffer dogs, dogs that have been specially trained to not only sniff out drug caches, explosives, contraband and stashed away cash, but also to sniff out mould! END_OF_DOCUMENT_TOKEN_TO_BE_REPLACED

Posted in TROTEC, Up To Date | Tagged with data logger, indoor climate, mould | Leave a comment

For many home-owners and tenants living in apartments or flats there is one sight which causes them great discomfort and fills them with utter disgust – mould. Yet mould is not only unsightly, it can quickly become dangerous and trigger allergic reactions or make a house’s or flat’s occupants very ill. All the more reason then to prevent mould from occurring in the first place and to find out more about what causes mould and what can be done to combat it.

One of the biggest causes of mould is the difference in temperature between the cold outside walls of a building and the heated rooms inside. That’s why the best form of insulation is insulation which is applied to the outside of the building. As a home-owner you can do something about it: you can carry out modernisation work and fix exterior cladding to the outside walls – as a tenant you can’t. This is why we have compiled a list with 5 golden rules designed to help those who in such cases cannot help themselves simply because they are living in rented accommodation and therefore unable to take the necessary steps that would make mould less of an issue and more a thing of the past.

If you are unable to follow this rule, because you are pushed for space and wouldn’t know what to do with certain pieces of furniture, then try to make sure that there is at least 10cm between the outside wall and the piece of furniture in question.

Rule No. 2:
The rooms in your flat have to be evenly heated.

This includes bedrooms which many people insist on not heating, because they believe that they will then be able to sleep better when they go to bed. This may be the case, but turning the central heating right off is going to give mould the chance it needs.

Rule No. 3:
Open the windows at least twice a day.

And when we say open, we mean open. Not just a crack, but wide open for about 5 to 10 minutes. This gives the air enough time to circulate. The stale, used air goes out and the fresh, hopefully clean air comes in.

Rule No. 4 :
Make sure that bathrooms are aired properly after a hot shower or hot bath.

This is sometimes much harder than you might first think: some windows are simply too small to be adequate and some bathrooms have no windows at all. In such cases a dehumidifier is just the right device. It extracts the moisture out of the air and creates just the right indoor climate.

It can be a little higher – along the walls, for example, where it can be as high as 80%, but this is an exception. If you’re looking for a way to measure the relative humidity, try one of our thermohygrometers. They are designed to do just that.

Oh, and by the way… If you are having an earnest problem with mould in your flat, then you are generally entitled to hold back some of the rent. This is, however, a sword which can cut both ways: landlords often try to turn the tables on tenants by claiming that the mould is a result of gross negligence on the part of the tenant who has not been airing the flat adequately.

Do you have or have you had problems with mould in your apartment or flat? Write to us and tell us about it. Or let us in on your secret if you have any other useful tips or golden rules which you would like to share with your fellow readers. We would love to hear from you.

TROTEC. For a better world.